Tecno Droidpad 7D USB Charging/Power Off Solution in this post update will guide you through the hustles of dealing with this unfriendly situation!

Often times, the problems resulting from phone’s inability to charge stems from carelessness on the part of phone users! Little did phone users know that chargers below manufacture’s standard specifications are a time bomb ready to happen at the slightest provocation!

In the past months an update on infinix hot 5 power solution was posted. That was a typical example of how using untrusted power sources could be detrimental to communication gadgets. Always go for recommended chargers.

Another, area users should be watchful about while using phones is the dangers of water damages! Most phones have gone to join their ancestors at an early age due to this menace.
In this post, I am going to show you areas to look out to while troubleshooting Tecno Droidpad 7D Charging/Power Off problem for solutions. In doing this, you will need the help of a multimeter because you will have to carry out some readings and measurements.

The Tecno droidpad 7D Charging/Power Off problem under consideration presented the following challenges:

In an attempt to solve this problem, two components were replaced after which the phone returned to normal working condition.

However, circled components can be removed without being replaced, and the phone will still charge even if the replacement isn’t done, is just that current voltage filtering and protection will be compromised. Its better to replace to be on the better end!

Hope this gives you an idea of what you could do in similar situation. Goodluck with your devices.
Like and share to let others know what you found out! 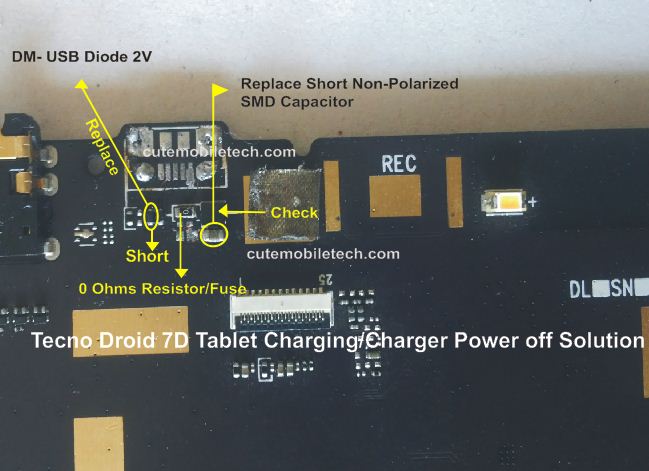 LG-H815 Powering Off When Charger Is Plugged In

This solution is applicable to phones powering off when charger is plugged in. This situation is usually as a result of a short circuit. Once the shorted component is detected, it is ok to remove or replace them. The short is mostly caused by power surge or water damage e.t.c. and usually affect the charging diode and capacitors which serves for regulating, rectifying, and filtering voltage current. This case is applicable to most phones in general. 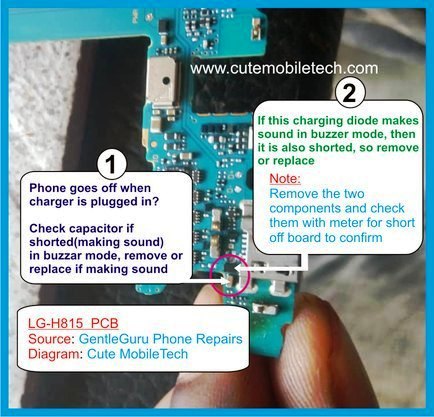