In this update, I will be freely sharing a painstaking Tecno M8 Power solution, a 100% dead fix for the phone under consideration as this can be very frustrating and almost make you want to quit!

Reasons For Dead/Power Problems In Phones

There are a lot of reasons why a phone can develop power problem. The problem could be as a result of bad chargers or power surge, water damage, hard fall on the ground, software issues et ceteral. All of these and more are already dealt with in details under all “Dead Phone Power Problem Solution“, you can check that out later on.

The Tecno M8 power solution or dead fix presented in this update is for the copy version, so you might see some different features. This phone couldn’t survive a sudden power surge which resulted in a burnt charger and the untimely death of the phone itself. So, the phone had to join its ancestors, hmmm….

After dissembling the phone, I found out that there was already an attempt to apply the Tecno M8 power solution as some of the power caps, charging caps and diode were already stricken out due to a short circuit.

Troubleshooting this problem was a terrible experience for me as it took so much of my time until I recall from a similar experience where the problem could be coming from….Boom! The phone finally came on after locating the marked glass IC in the diagram below.

The marked glass IC is very crucial to the healthy functioning of the phone as it has connection with the power section of the phone. So, a short will be a death sentence in any case whether due to water or spike from power surges et cetera. 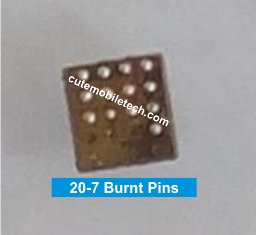 Whats the Tecno M8 Power or Dead Fix Solution Then?

The Tecno M8 power solution or dead fix can be applied first by troubleshooting for diodes and capacitors shorts in the power and battery charging sections and sometimes even in the network sections. If you have done this and the problem still persists, then you should be looking at the glass IC marked in the diagram for possible short which is what actually happened in this case study! 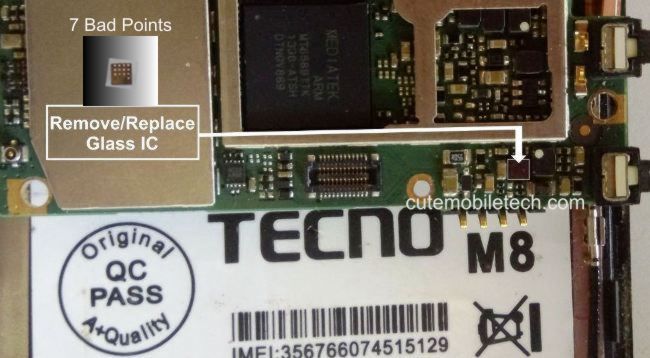 What’s your thought on this update? Was this post helpful? Good luck with your devices.

Don’t Miss Out On: