In this article, “Dead phone power problem solution”, I will be showing you how to handle power related issues in mobile phones with respect to the circumstances under which these problems do occur with focus on possible causes and solutions.

What Is Power Problem?

A power problem is when a phone shuts down and is unable to power on.  This situation is very annoying especially if you have important information or data you have not backed-up for one reason or the other! 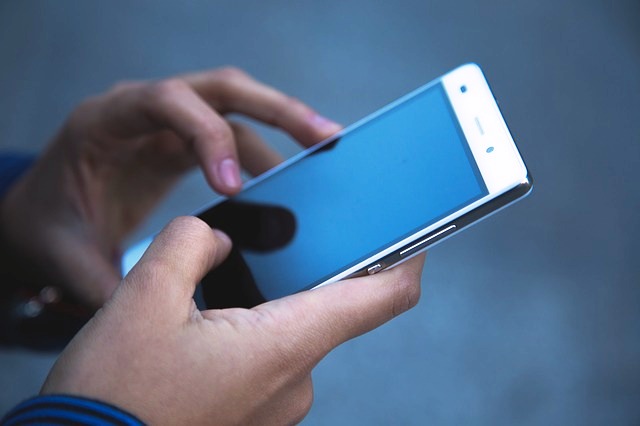 Generally speaking, there are a lot of reasons why a phone could become dead, and thus necessitating a power solution to bring such dead phone back to normal functioning condition. So let me show you a list of possible causes and solution for power problem in mobile phones. They include and not limited to the following:

Production Fault: Production related faults are one out of many possible causes that necessitate dead phone power solution. This happens when you buy a smartphone only to find yourself going asking for warranty considerations. This is why companies should be flexible about this policy as users might feel cheated if they are not compensated accordingly.

Water Damage: This is when a phone experiences water splash or falls in to it or any other liquid that conducts electric current. Liquids, especially H20 (water) that conducts electricity will easily convey electrons that will eventually create a chemical reaction with the battery leading to explosions and damages to internal components on the phone’s PCB or the logic and power unit of the mobile phone. “25% of phones fixed at Cute Mobiletech are water damage related and are very challenging though good recovery successes have been recorded”!

Bad Phone Chargers: None-OEM chargers that falls short of standard specification are also one of the known causes of charging problems we have found to be part of the pack! Sometimes, it could be as a result of using a faulty charger which may still be an original one.

Faulty Components: The mobile phone is only mobile and handy, but is also like a PC. It is a system of its own kind and has so many parts that are inter-dependent. When one component is bad others could become affected and later may result in further complications that could temporarily or permanently shut down a phone! Components that may necessitate a dead phone power problem solution may include parts like. Shorted diode, bad fuse or (R22), Shorted capacitor, power IC (integrated circuit) or other big parts and so on.

Ageing Factor: Though bitter truth, no phone lives for ever! A phone will finally be laid to rest either at repair center or even while in custody of the owner, this is because the components that makes up the phone also have their life span limit which when reached will result in multiple issues.

Corrupt Firmware: The firmware are the program instructions that controls and give the phone a “life to live”. Therefore, when the firmware is corrupted by viruses or malicious apps, things could go bad resulting in a dead phone.

Wrong or Custom OS: Wrong or custom OS or firmware can result in dead phones. The number one cause of dead phone problem especially in Mediatek powered devices of Tecno, Gionee, Infinix, clone mediatek Samsung phones is when the wrong  “preloader file” is flashed in to the lash memory.

Aside the list of possible causes of dead phone problem, there are others not in this list which we will cover when this article is subsequently updated. But let me also add that the CPU bad condition could result in power problem too if it has been badly affected.

Are There Possible Solutions To Phone Power Problem?

Frankly speaking, when it comes to solution to power problem, there is no one clear cut way to achieve this. The only way we know for now that is working for us is the “ancient path”, called “troubleshooting”, so if you are ready to fix that power problem, you will have to get ready for “shooting with your weapon”. Oh, don’t get it wrong, the weapon am talking about is your problem finding tool. That is why you can’t be a successful phone technician if you have not mastered the art of using the multi-meter and other machines meant for this purpose.

How To Troubleshoot Power Problems In Mobile Phones

Dead phone power problem is a common phenomenon. The main goal of troubleshooting a m      obile phone is to proffer solution. To troubleshoot properly, ask the following questions as if you are a Medical Doctor attending to a patient:

Did the problem happen shortly after buying a new phone? Then go for claims of warranty. Due to faulty production, one could get a form of compensation.

Find out if it was caused by water or other liquid substances aside the ones that don’t conduct electric current. If it was caused by water as the case is mostly, locate the areas affected and clean up using a cleansing agent like ethanol-alcohol or menthylated spirit which dries up quickly. After being heated with the rework-station or sun to dry up, the phone should power on if it’s a minor case otherwise you will have to keep checking for short or open circuit or shorted components that could be responsible for that power problem using a multi-meter.

Find out if it was caused by a bad or faulty charger. To do this, use the multi-meter to check if the current the charger supplies is above 5.0v and 2500mAh (2.5Amps). If the current voltage on the meter is unstable, that’s a signal to watch. Look for the power diode close to the battery terminal area where you see points like VBat, BSI, GND and so on. Shorted power diode could cause power problem if affected by chargers or other causes. A normal power diode in many cases should allow current flow in one direction and not back and forth. If causes a short, replace the shorted diode or strike it out.

Find out if the phone was previously flashed: If you have found out that the phone went dead after a flash, simply get the right firmware and re-flash back. If you don’t know what flashing is all about, you can learn about software level repair here and that could help in resolving the problem. 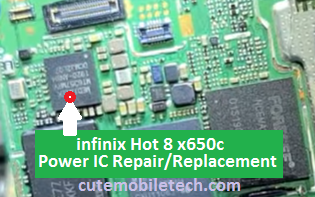 Below are areas of concentration for power problem for Infinix Hot 6 phone. 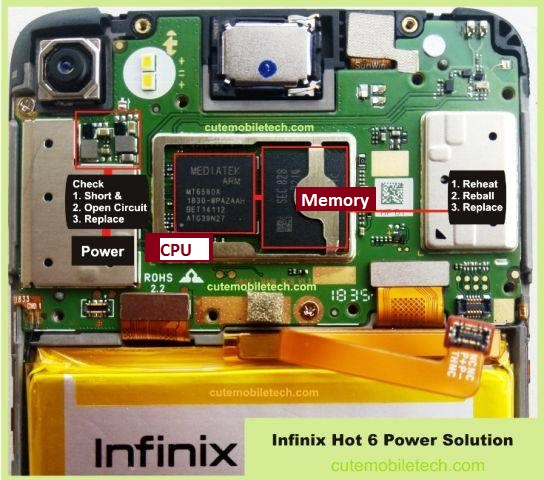 Below is the diagram for MTN Smart M561M3 Power Problem Solution.  Problem was as a result of power surge during charging process overnight. 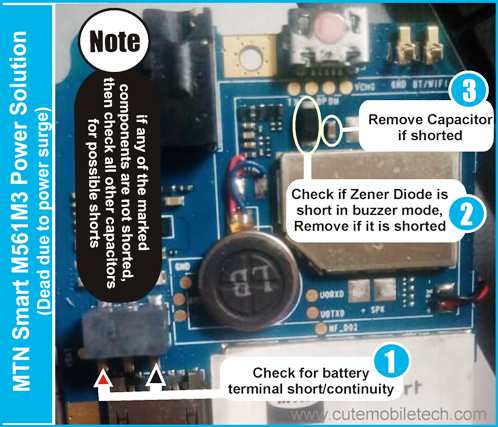 In conclusion, dead phone power problem solution is all about good troubleshooting skills with the right mind and tools.

Did you find this article helpful? Would you like to share your dead phone power problem solution experience in comment box below to let others know about your experience and how you scaled through?