So you kept chasing for solutions up to this point? Anyway, this article on Infinix hot 5 power problem solution is intended to ease your pains while solving problems resulting from a totally dead infinix hot 5 power issue. I will be showing you how to handle power related issues in mobile phones with respect to the circumstances under which these problems do occur with focus on possible causes and solutions as this problem can sometimes drive you crazy and even make you want to smash the damned phone against the wall! Alright, lets see now if the solutions here helps to bring down your high blood pressure!

What Is Power Problem?

A power problem is when a phone shuts down and is unable to power on, its like you feeling your strength going a way like G+ (GooglePlus) and suddenly you passed out as if it was a joke! This situation is very annoying especially if you have important information or data you have not backed-up for one reason or the other!

Generally speaking, there are a lot of reasons why a phone could become dead, thus necessitating a power solution. To rescue such phone from the “underworld possession”, you will have to give it a “chameleon approach and gorilla attack” at the same time like someone in world war 2! So let me show you a list of possible causes and solution for Infinix hot 5 power problem and the likes. They include but are not limited to the following:

Are There Possible Solutions For Infinix Hot 5 Power Problem?

Frankly speaking, when it comes to solution to power problem, there is no one clear cut way to achieve this. The only way we know for now that is working for us is the “ancient path”, called “troubleshooting”, so if you are ready to fix that power problem, you will have to get ready for “shooting with your weapon”. Oh, don’t get it wrong, the weapon am talking about is your problem finding tool. That is why you can’t be a successful GSM repair expert/technician if you have not mastered the art of using the multi-meter and other machines meant for this purpose.

Infinix hot 5 power problem and phones generally is a common phenomenon. The main goal of troubleshooting a mobile phone is for problem solution. To troubleshoot properly, ask the following questions as if you are a Medical Doctor attending to an unfortunate patient:

Description of the problem:

This infinix hot 5 Lite x559 became dead after it was plugged to a solar powered radio player for charging purpose. It Got dead due to power surge and as a result a diode was shorted, after a hard time troubleshooting for the likely source of the problem, I managed to discover the spotted shorted power diode under the silver protective cover. 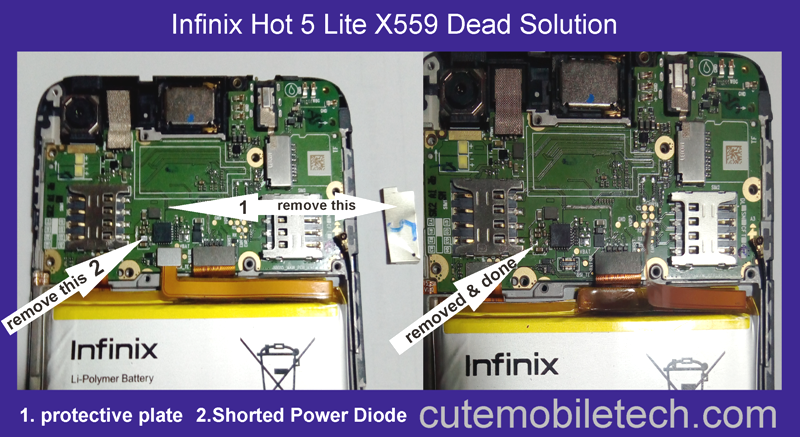 In conclusion, dead phone power problem solution is all about good troubleshooting skills with the right mind and tools.

Did you find this article helpful? Do like or share to let others know what you found out!

Would you like to share your Infinix hot 5 Lite or other power problem experience in comment box below to let others know about your challenge and how you tackled it or need some help?